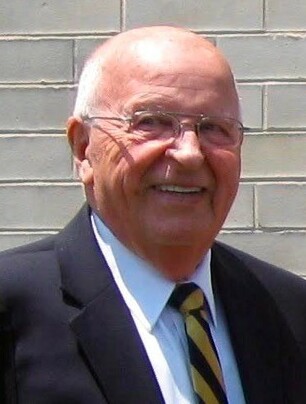 Please share a memory of The Rev. Dr. James E. to include in a keepsake book for family and friends.
View Tribute Book

The Rev. Dr. James E. Bennett, 87, a resident of Trinity on Laurens Retirement Community, died on January 21, 2023, following a brief period of declining health. He is now in the arms of the Lord and reunited with his beloved wife, Charlotte Bennett, who passed away in July 2019. He was born to the late Mary and C. Thorne Bennett in 1935 in Brookeville, PA. He earned his B.A. degree at Thiel College, Greenville, PA; his M. Div. at Northwestern Lutheran Theological Seminary, Minneapolis, MN; and his D. Min. at Lexington Theological Seminary, Lexington, KY.

Dr. Bennett was ordained into the Ministry of Word and Sacrament on June 1, 1960.  During his 60 years of ministry, he served as senior pastor at various ELCA congregations, including Emmanuel Lutheran Church, Export, PA (1960-1967); Faith Lutheran Church, Lexington, KY (1967-1973); Berkeley Hills Lutheran Church, Pittsburgh, PA (1976-1987); and St. Martin’s Lutheran Church, Austin, TX (1987-1994) until his election as Bishop of the Southwestern Texas Synod in 1994.  He held that position until retirement in 2000.  He also served on the LCA staff in the Division for Mission in North America as well as Assistant to the Bishop of the Indiana-Kentucky Synod (1973-1976).

His interest in music was fostered during his high school and college years. His studies included choral conducting, organ, and instrumental conducting.  He served as chapel organist and choirmaster during his seminary years.  Later, he also taught courses in liturgy and homiletics at the seminary level, teaching at Notre Dame University and the Lutheran Seminary Program of the Southwest. Throughout his career, he mentored many who were considering a life of ministry and supported them throughout their seminary years and professional life.

Jim met his wife, Char, while singing in the Thiel College Choir. They were married on August 17, 1957, and moved to Minneapolis for Jim to attend seminary.  After seminary, they returned to Pennsylvania, where he served his first congregation and where their three children, Christopher, Michele, and Cynthia, were born. Char was a constant support to Jim, personally and professionally. She described him as a “man of action,” and this was evident throughout his ministry and personal life.

Jim was an avid golfer who also enjoyed reading, gardening, and flower arranging. Music was always a part of Jim’s life, from playing the piano to conducting the Agape Singers youth choir in Pittsburgh to enjoying live symphony performances. After retirement, Jim and Char traveled extensively, taking many trips together and with friends. Jim loved meeting and talking with people, making friends wherever he went.

After moving to Aiken, SC, Jim and Char were active members at St. Paul Lutheran Church, where they both sang in the choir. Jim continued his ministry by supply preaching at various churches and at Trinity on Laurens. Jim and Char enjoyed living in Aiken, where they formed close relationships with new friends and neighbors.

Dr. Bennett was predeceased by his wife of 61 years, Charlotte, in 2019. He is survived by children Chris Bennett (Jeri) of Charlotte, NC; Shelley Stamm (Bill) of Poolesville, MD; and Cindy Bennett (Dan) of Crownsville, MD; seven loving grandchildren and four great-grandchildren.

The family wishes to thank the entire staff at Trinity on Laurens who provided love and care. Blessings to all who visited and prayed.

In lieu of flowers, memorial contributions may be directed to the ELCA Young Adults in Global Mission program, Trinity on Laurens in Aiken, SC, or the charity of your choice.

To send flowers to the family or plant a tree in memory of The Rev. Dr. James E. Bennett , please visit Tribute Store
Saturday
18
February

Share Your Memory of
The Rev. Dr. James E.
Upload Your Memory View All Memories
Be the first to upload a memory!
Share A Memory
Send Flowers
Plant a Tree