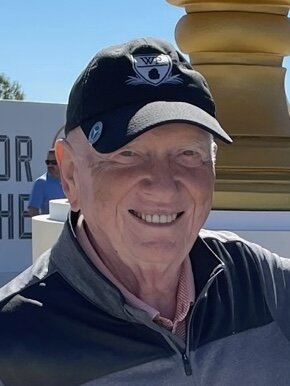 Please share a memory of Roger to include in a keepsake book for family and friends.
View Tribute Book

Roger was born on June 7, 1943, in Detroit, Michigan, to the late Stanley Chester Morenc and the late Mary Gach Morenc. He received his bachelor’s degree in psychology from Wayne State University, but he found his career in the computer field. He had a brilliant, creative mind and was talented in all aspects of the ever-changing technology. He was always trying something new—he developed apps for the iPhone and iPad in retirement.

Roger had a love for travel for both work and leisure. His career took him to Japan 26 times, India six times, and England and Europe many times. Roger and his wife, Carol, enjoyed their last pleasure trip to Italy this fall. Roger also had a love of the arts and for fine food and wine. You knew he felt the emotions brought forth by a good song or movie and relished in collecting pieces of art with his wife during their travels together.  He even tried his hand at creating his own sculptures.

His passion for golf began at the age of 13, and his love of the game lasted throughout his life. He took a personal thrill in being able to play the private club where he caddied in his youth. He taught Carol the sport, and in their 49-plus years together, they played many notable courses, including Pebble Beach.

Roger had a joy for life and for sharing his excitement with family, friends, and colleagues. No matter what it was, if Roger found something he enjoyed—some thing or experience—sharing it with others allowed him to enjoy it again. His greatest passion was for his family. He will be remembered as a wonderful husband, father, son, and brother. He felt enormous pride in his three children and eight grandchildren.

Memorial contributions in lieu of flowers may be directed to the First Tee of Aiken or to the charity of your choice.

To send flowers to the family or plant a tree in memory of Roger Morenc , please visit Tribute Store
Print
Friday
6
January