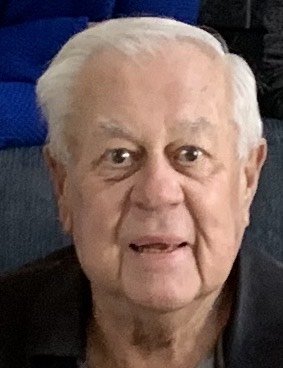 AIKEN, SC – Arthur Richard Pohle, age 91, entered into eternal rest on Sunday February 7, 2021 in the comfort of his family.  He was born in Plainfield, NJ on June 8, 1929 to Arthur Karl and Marion Pohle.

Art served in the Air Force and was honorably discharged in 1952.  A graduate of Rider College, he had a successful career in purchasing and sales at U.S. Gypsum Corporation and Sun Chemical Corporation.  After spending most of his career living the Chicago suburb of Naperville, Art and his wife of 47 years, Ann, retired to Aiken in 1992.  He was an avid golfer and loved the Los Angeles Dodgers from their roots in Brooklyn and Notre Dame football.

He is preceded in death by his parents, wife Ann and brother Robert.  Art is survived by his three children, daughter Linda Flint (Jack), son Richard (Sue) and daughter Barbara Lowe. He is also the proud “Pop Pop” to grandchildren Lauren Lowe, Anna Tomasetti, Allison, Eric and Brooke Pohle and to his great grandson, Hendrix Lowe.

A private family service will be held at a future date.  In lieu of flowers, the family asks that memorial contributions be made in his honor to support pediatric cancer research at THON.org, the Penn State student-run philanthropy.