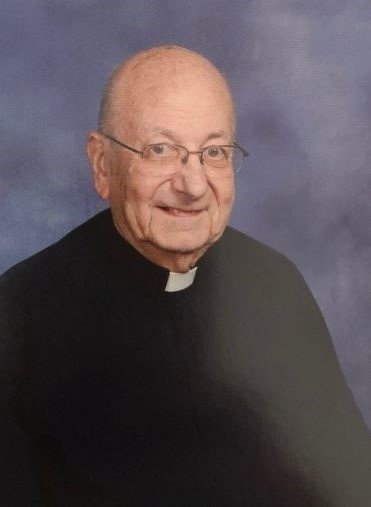 Father Hepner’s first assignment was as Parochial Vicar of Holy Rosary, Cleveland.  Fr. Hepner served on the faculty of St. Mary Seminary, September of 1963 – August 1968.  In August of 1968, he went on to St. Paul University, Ottawa, Canada for Graduate Studies and he returned to St. Mary Seminary in 1969.  In January of 1975 he became a member of the Medical Moral Advisory Board.  Fr. Hepner was a staff member of the Permanent Diaconate Program July 1976 – July 1, 1978.  On September 15, 1977 Fr. Hepner was appointed co-pastor of Our Lady of Mt. Carmel, Wickliffe and was appointed Pastor on May 16, 1978.  Fr. Hepner was appointed Pastor Holy Trinity, Bedford on January 27, 1987 where he served until retirement on January 7, 2001.  Fr. Hepner moved to South Carolina where he continued his priestly ministry in retirement at a number of parishes across the entire diocese of Charleston.  He was a hard worked and dedicated to the people entrusted to his care.  His life was spent in service to others.  He loved being a priest and his primary focus was to bring people closer to Christ.

He was preceded in death by his parents; his sister, Irene, and loving friend, Sister Josephine Jendrisak.

He is survived by his nieces, Susan Darr and Diane Anderson; brother, Julius “Butch” Hepner; and loving friend, Joan McGinty.

The Vigil Liturgy will be celebrated Tuesday, January 5, 2021 at 6:30PM with visitation to follow until 8:00PM at St. Mary Help of Christians Catholic Church, Fairfield St with The Very Rev. Gregory B. Wilson.

The Mass of Christian Burial will be celebrated Wednesday, January 6, 2021 at 11:00AM at St. Mary Help of Christians Catholic Church, Fairfield St, with Monsignor Richard Harris as celebrant.  Final prayers and commendation to be scheduled for a later date at Mepkin Abbey, Moncks Corner, SC.

Memorial contributions may be made in Father Ernie’s memory to The St. Vincent de Paul Society, PO Box 438, Aiken, SC 29802.

Eternal rest grant unto him, O Lord; and let perpetual light shine upon him.  May Fr. Hepner, all the bishops, priests, and deacons, and all the Faithful Departed live forever in the joy of the Resurrection.

To send flowers to the family or plant a tree in memory of Father Ernest Hepner, please visit Tribute Store
Tuesday
5
January

Share Your Memory of
Father Ernest
Upload Your Memory View All Memories
Be the first to upload a memory!
Share A Memory
Send Flowers