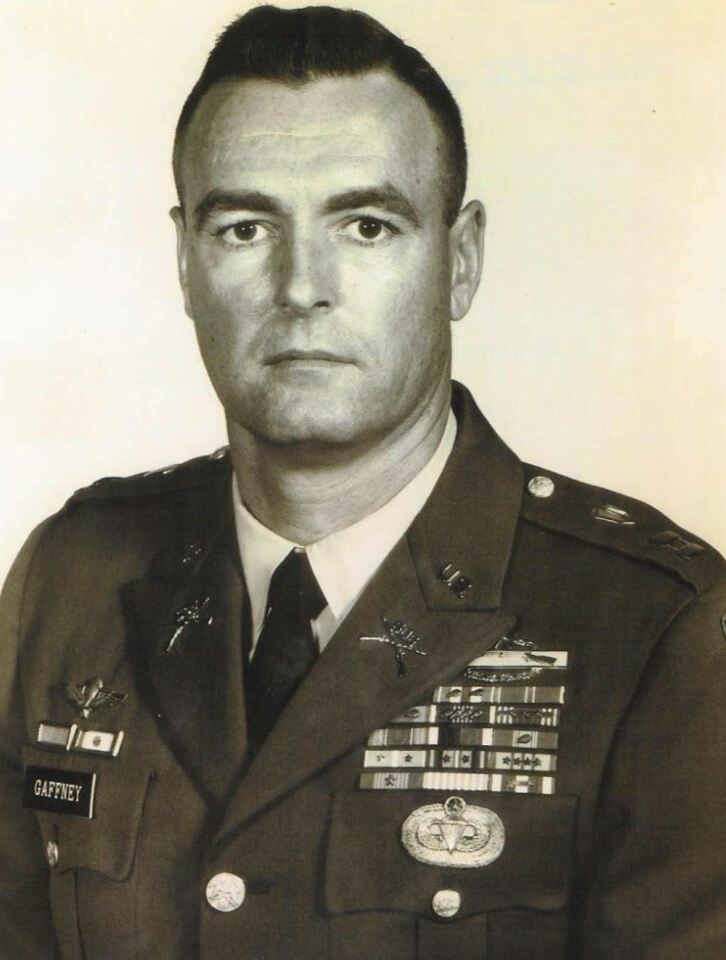 Please share a memory of Retired Captain Thomas to include in a keepsake book for family and friends.
View Tribute Book

Thomas (Tom) Francis Gaffney, age 93, of Aiken, S.C. passed away on December 28, 2022 at home attended by his beloved wife, Carolyn Gaffney. Tom was born on June 28, 1929 in Honolulu, Hawaii to Thomas Gaffney and Florence (nee Sylva) Gaffney.  Tom's father was in the military and the family moved to California when Tom was very young.  He grew up in Marin County, California and graduated in 1945 from Tamalpais High School in Sausalito, California.
In 1945, at the age of 16, Tom joined the U.S Army and spent the next two decades traveling the world - serving in Japan, Germany, the Middle East, and Southeast Asia.  He served 24 years on active duty and retired to Augusta, Georgia in 1969.
With 12 Campaign Stars, his service record reads like a compendium of U.S military hotspots - experiencing combat in Korea, Laos, and Vietnam and lesser known conflicts in Lebanon and the Dominican Republic. As an Airborne trooper, his service awards include: three Silver Stars, a Bronze Star, three Air Medals, and six Army Commendation Medals. Tom spent 5 years in the U.S. Special Forces including many missions overseas, some of which are still classified. Later, Tom served as a member of the Special Forces Team honor guard for President John F. Kennedy.
In a career full of achievements, possibly the most notable was during his second tour of duty in the Korean War when his platoon leader was wounded in action and it fell to Tom to immediately take command. Tom rallied the troops, including others in retreat, and held the position from being overrun by the advancing enemy. For Tom's outstanding action, Brigadier General Westmoreland, commander of the 187th Airborne Regimental Combat Team, awarded Tom a Battlefield Commission. It was not until 1967 that Tom's Reserve Commission was activated and he was appointed Captain and Commander of Alpha Company 3rd 506th Airborne Infantry (101st Airborne Division) with whom he served through major missions in Vietnam, including the 1968 Tet Counteroffensive.
After leaving the military, Tom attended Augusta State University and earned his Bachelor's Degree in Accounting. That launched a second career in civil service in the financial sectors of Veterans Administration Hospitals in Miami, Charleston, and Augusta. He served the last years of his 23 year civil service career as the Chief Financial Officer for the two Veterans Administration Hospitals in Augusta, Georgia.
In retirement, Tom enjoyed traveling with his lovely wife, Carolyn, and golfing with friends at Woodside Plantation Country Club and with the Aiken Seniors. Giving back to the community, Tom used his expertise in accounting to complete annual income taxes for the underprivileged in Aiken. He was a parishioner of St. Mary Help of Christians Catholic Church in Aiken, SC.
In addition to his wife, Tom is survived by 3 daughters, Susan Gaffney Trueblood of Martinez, GA, Debra Bailey of Columbia, SC & Dawn (George) Anderson of Denton, Texas; 2 sons, Timothy John (Jocelyn) Gaffney of Phoenix, AZ & Chris Fussell of Denton, TX; 7 grandchildren, Timette (Kyle) Nevala, Nicole Trueblood, Daniel (Camille) Trueblood,  McKenna Gaffney, Savannah Gaffney, Lauren Bailey and Neal Anderson; 5 great-grandchildren.
In addition to his parents, Tom was pre-deceased by a son, Daniel Thomas Gaffney and two brothers, Michael Gaffney & Lawrence Gaffney.
A Requiem Mass will be held on Tuesday, January 3, 2023 at 10:00am in the sanctuary of St. Mary Help of Christian Church, 203 Park Ave, SW, Aiken, SC 29801 with Rev. Orlando Serrano Ardila as celebrant.
Interment services with full military honors will take place at 2:00p.m. on Tuesday , January 3, 2022 at Fort Jackson National Cemetery, 4170 Percival Rd, Columbia, SC 29229.
For those unable to attend in person, the Mass along with the Interment service with full Military Honors  will be livestreamed on the official George Funeral Home & Cremation Center Face Book page (Facebook.com/GFHCC) beginning at 10:00 a.m. Tuesday morning.
The family will receive friends on Monday, January 2, 2023 from 5:00pm until 7:00p.m. at the Historic George Funeral Home & Cremation Center, 211 Park Ave SW, Aiken, SC 29801. (803) 649.6234
In lieu of flowers, memorials may be made to the Wounded Warriors Project, Post Office Box 758516, Topeka, Kansas, 66675-8516 or to St. Jude's Children Research Hospital, 501 St. Jude Place Memphis, TN 38105
Online expressions of sympathy for the family may be left by visiting www.georgefuneralhomes.com
As a soldier, husband, and father, Tom Gaffney lived his life in service to his country, family, and fellow U.S. Veterans. Tom leaves us with a legacy of life-long friendships, a loving wife, a proud family, and an example of service and commitment for us all.

To send flowers to the family or plant a tree in memory of Retired Captain Thomas Gaffney, please visit Tribute Store
Monday
2
January

Share Your Memory of
Retired Captain Thomas
Upload Your Memory View All Memories
Be the first to upload a memory!
Share A Memory
Send Flowers
Plant a Tree