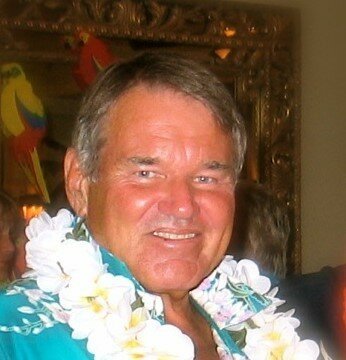 Please share a memory of James to include in a keepsake book for family and friends.
View Tribute Book

James was born on January 17, 1949 in Elizabeth, New Jersey. He spent most of his life on or near the ocean, working as a Marine Mechanic, Marina Owner, and Ship’s Captain. A tireless worker, James owned and operated a small but successful marina and marine engine shop, Advanced Marine Services of Jupiter, Florida, for 30 years.

In 1989, James met Phoebe Connell in Juno Beach, Florida. They fell in love immediately and were married in 1991.

James worked hard and played hard. When we wasn’t fixing, cleaning, or cooking something, he could often be found fishing, diving, boating, playing guitar, or bringing a party to life. In his later years, golf became a passion for him. He was also a legendary storyteller; the hilarious tales he told of his myriad jaw-dropping adventures will never be forgotten by his family and friends.

Anyone who knew James knew that he loved and cared for his family deeply. He was preceded in death by his parents, Edward and Alice Walters, and brother, Ned Walters. He is survived by his wife, Phoebe Walters (nee Connell), his brother, Tom Walters, his step-son, Joshua (Adrienne) Eastlake, his step-daughter Jessica (John) Marunowski, three grandchildren, Lydia, Isaac, and Grady, several loving in-laws, and countless friends.

No services will be held at this time. In lieu of flowers, donations may be made to Tunnels to Towers (t2t.org).

To send flowers to the family or plant a tree in memory of James Walters, please visit Tribute Store

Look inside to read what others have shared
Family and friends are coming together online to create a special keepsake. Every memory left on the online obituary will be automatically included in this book.
View Tribute Book
Services for James Walters
There are no events scheduled. You can still show your support by sending flowers directly to the family, or planting a memorial tree in memory of James Walters.
Visit the Tribute Store

Share Your Memory of
James
Upload Your Memory View All Memories
Be the first to upload a memory!
Share A Memory
Send Flowers
Plant a Tree