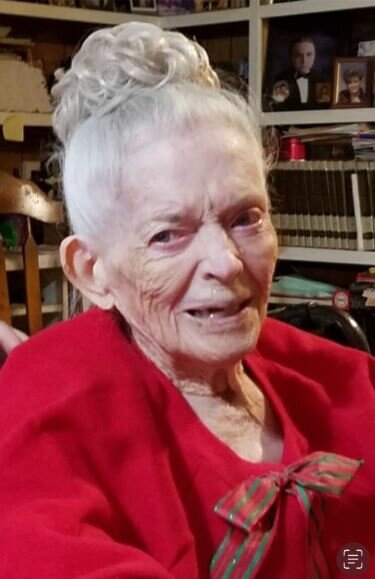 Please share a memory of Cassie to include in a keepsake book for family and friends.
View Tribute Book

AIKEN, SC: Cassie Arkansas Spires Wood always said she wanted to live to be 100 - and she did, surpassing her goal by five months and nine days.

Mrs. Wood, who was known as Pete by members of her family, died early Friday morning, September 23, 2022, surrounded by her loving family and Suzie, her gray Tabby, who adopted her and whom she always called “the best little cat in Aiken County.”

Born in Windsor in April 1922, Mrs. Wood was one of eight children born to the late Willie H. Spires and Florrie Lowe Spires. She was a lifelong resident of Aiken and Aiken County.

Mrs. Wood grew up on a farm near Chime Bell Church, which her maternal grandmother, Arkansas Lowe, for whom she was named, helped start. She also was named for her favorite aunt, Cassie Lowe Spires. She attended the old Talatha-Hawthorn School in what is now New Ellenton.

In 1941, Mrs. Wood married E. Frank Wood, whom she met at church, and the couple started their family. Wanting to build a house, Mrs. Wood went to work as a spinner at Graniteville Company’s Warrenville Mill. During World War II, most of the male employees had been called to the fight overseas and were replaced by women.

When the couple had saved $3,000, they built their house, which Mrs. Wood called her home for the last 75 years.

During the 1950s and ’60s, Mrs. Wood would get up early and cook a full Southern breakfast, including delicious buttermilk biscuits, before making the 15-minute drive to Warrenville.

Often male employees would watch her pull into the parking lot and make bets as to whether she’d make it to the fourth-floor spinning room by 8 a.m. She always did, running up the fire escape and making it onto the floor just in time to start her eight-hour shift.

She loved working and continued spinning, which was hard work for a man or a woman, into her 60s when the Warrenville Mill closed, and she retired.

The hard work kept Mrs. Wood healthy, trim and fit, but she also was born with a limber frame. She was good at impromptu gymnastics and sometimes performed spontaneous cartwheels in her backyard, prompting her neighbor, the late Joe Wessinger, to yell across the hedge, “Do it again, ’Kanse. Do it again.”

In addition to her delicious biscuits, Mrs. Wood made the best cornbread not only in Aiken County but possibly the whole South if you asked her family. Every year just before Thanksgiving, she made two fruitcakes, a treat her family still makes today.

Mrs. Wood was an excellent gardener with a true green thumb. For many years, she and her husband tended two large vegetable gardens, one in Bath and one in New Ellenton, which filled her freezer with fresh vegetables, including butter beans and all kinds of peas, from pink eyes to crowders, for the winter. In the summer, potted begonias, impatiens, and petunias filled her front porch with color.

Most importantly, Mrs. Wood loved her family and always put them first, and her family felt the same about her. She will be missed.

The family is thankful for the wonderful care Mrs. Wood received from Traditions Hospice and from Gail Booker and others with Daybreak Adult Care Services Inc. over the last three years.

The family will receive friends from 2 p.m. to 3:30 p.m. Monday, September 26, at George Funeral Home, 211 Park Ave. S.W. A graveside service with the Rev. Jeff Taylor, the chaplain with Traditions Hospice, officiating will begin at 4 p.m. Monday, September 26, in the cemetery at St. Paul United Methodist Church, 600 Main St., New Ellenton, next to her late husband. The church is next to her late husband’s childhood farm.

Online condolences may be left for the Wood family by visiting www.georgefuneralhomes.com.

To send flowers to the family or plant a tree in memory of Cassie Wood, please visit Tribute Store
Monday
26
September

Share Your Memory of
Cassie
Upload Your Memory View All Memories
Be the first to upload a memory!
Share A Memory
Send Flowers
Plant a Tree