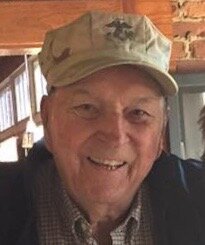 Please share a memory of Bernard to include in a keepsake book for family and friends.
View Tribute Book

Mr. Koenig was born December 30, 1930 in Baltimore, Maryland to the late Frederick and Josephine Koenig. He proudly served his country in the US Marine Corps during the Korean War. He had made Aiken, SC his home for the past eighteen years, having previously lived in Hilton Head, SC. He was a congregant of St. Mary Help of Christians Catholic Church. He loved his family, his church, the Baltimore Ravens and Orioles and steaming crabs.

In addition to his parents, he was preceded in death by a brother, Fred Koenig and a sister, Julia Fried.

A Requiem Mass will be celebrated at 2:00 p.m. on Thursday, March 31st at St. Mary Help of Christians Catholic Church, Fairfield St., with the Very Rev. Father Gregory Wilson as celebrant. Final prayers and commendation will follow in the church columbarium.

To send flowers to the family or plant a tree in memory of Bernard Koenig , please visit Tribute Store
Thursday
31
March

Share Your Memory of
Bernard
Upload Your Memory View All Memories
Be the first to upload a memory!
Share A Memory
Send Flowers
Plant a Tree