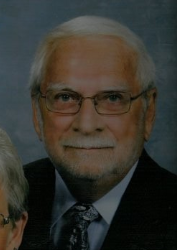 Bob, as he was affectionately known, was born December 18, 1932 in Flint, Michigan to the late Lewis Evan Fent and the late Phyllis Jean Fent. He was a veteran of the US Air Force, having served from 1952 until 1956, during the Korean War. He was retired from the retail business and was a member of Trinity United Methodist Church where he served twice as a church trustee. Bob volunteered with ACTS, and he started the bird feeder program at Anchor Health and Rehab. The program placed bird feeders at each resident’s window for their enjoyment. The church raises funds for the program to help supply bird food for the feeders.  Bob was also very honored and happy to have been able to participate on one of the Veterans Honor Flights to Washington DC in recognition of his service to our country.

Bob was preceded in death by his parents and three infant sons.

A memorial service, with social distancing, will be held at 11:00 a.m., Friday, May 8, 2020 in The George Funeral Chapel. Pastors Lee Phillips and Donnie Bates will officiate. The family will receive friends beginning at 10:00 a.m. at the funeral home on Friday. Interment will be at Ft. Jackson National Cemetery at a later date.

To send flowers to the family or plant a tree in memory of Robert Fent , please visit Tribute Store
Friday
8
May