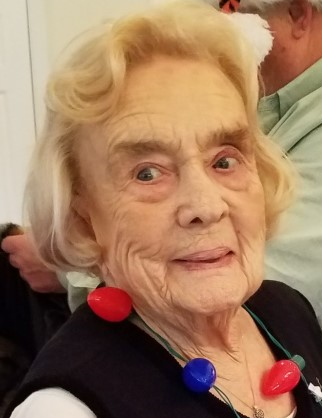 Annie Mae Breeden, a tiny spit-fire with beautiful blue eyes and a halo of golden locks, was born on February 26, 1928  to Robert Frank Breeden and Caroline May Matheson Breeden.  Anna was the younger of two sisters raised on her fathers’ farm in Bennettsville, South Carolina.

She graduated from Bennettsville High School in 1945, adopted what she felt was the more sophisticated name of “Anna” and enrolled at Winthrop College, transferring to the Columbia School of Nursing where she earned her R.N.

Over the years she set up housekeeping first in Orangeburg, then Holly Hill, and Santee joining organizations too numerous to list.  Her longest and most cherished membership was as a Yahootee, a childhood group she helped organize in Bennettsville that provided her with life long friends.  She was also a member of the Holly Hill Methodist Church, participating in many outreach programs.

Anna loved reading, traveling, needlework and a good bottle of wine.  Her beautiful needlework garnered her many awards as well as a museum exhibition in Columbia. Family and friends prize the pieces she gifted them.  Most of all Anna loved her boys.

“No greater fortune was ever afforded to a child than to have been born to this remarkable woman.”

To send flowers to the family or plant a tree in memory of Anna Miller, please visit Tribute Store
Print
Saturday
9
November