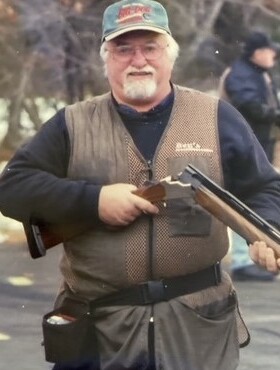 Please share a memory of Loran to include in a keepsake book for family and friends.
View Tribute Book

Loran “Bud” Saulnier,78, passed peacefully on October 30, 2021 with his loving wife and family by his side. Bud was born in Beverly MA, July 6, 1943 to Wilfred and Nora Saulnier. Bud is survived by his wife of 35 years Carol, his children Kimberly Robinson, William (Melissa) Starrak-Robinson, Christopher (Jerrilyn) Robinson, Stephanie (David) Lane and niece Rachel Saulnier Crateau. Bud was loved by many grandchildren, great-grandchildren, nieces, nephews, and brothers and sisters-in law.

Bud was preceded in death by his parents, Wilfred and Nora (Sheehan), his brother Joe, his sisters Kathy Saulnier, Eileen Manning, and infant Mary Elizabeth as well as his niece Melissa Saulnier-Smart.

Bud enjoyed spending time with his family, as well as hunting and fishing. He had a love for animals and enjoyed walks with his dog, Maggie Rose and sharing a snuggle with his beloved Mama Cat. He and Carol made many memories camping and boating on the lake in New Hampshire or walking Crane’s Beach, in Ipswich, MA. He was an avid sports fan and enjoyed watching the Patriots, Red Sox, the Boston Bruins.

Bud and Carol retired to Edgefield, South Carolina in 2005. He spent many days shooting trap and skeet with his friends at the Carolina Star Shooting Club. Bud’s other favorite past time was taste testing goodies made by his beloved sister-in-law, “Nan-Honey”.

At his requests there will be no service. In lieu of flowers, donations may be made to your favorite animal shelter.

To send flowers to the family or plant a tree in memory of Loran Saulnier, please visit Tribute Store

A Memorial Tree was planted for Loran
We are deeply sorry for your loss ~ the staff at George Funeral Home & Cremation Center
Join in honoring their life - plant a memorial tree
Services for Loran Saulnier
There are no events scheduled. You can still show your support by sending flowers directly to the family, or planting a memorial tree in memory of Loran Saulnier.
Visit the Tribute Store

Share Your Memory of
Loran
Upload Your Memory View All Memories
Be the first to upload a memory!
Share A Memory
Send Flowers
Plant a Tree