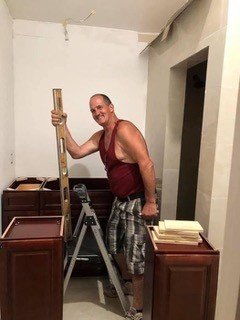 Please share a memory of Sam to include in a keepsake book for family and friends.
View Tribute Book

AIKEN, SC: Sam William “Sammy” Riche passed away suddenly July 19, 2021 at the age of 59. Sam was born August 22, 1961 at Saint Benedict's Hospital in Ogden Utah. He threw his twin Marty out first and a few minutes later he arrived and it was on!...

Sam grew up in Ogden Utah and attended local schools; he started at Saint Joseph grade school then on the Polk Elementary, then to Mount Ogden Junior High.  After graduating Mount Ogden he moved on to Ogden High and then finally graduated St. Joseph High in the class of 1979.

After High School Sam began working as a chef, starting at Mr. Steak, then continuing on to the Balcony, followed by The Court Room in the Old Post Office.  Sam loved cooking and working with the people there. Later he began a career in construction starting with Western Railroad Builders and shortly after, he moved to Nantucket Island where he learned to build custom homes. Sam was a very talented carpenter. Carpentry was something that he loved very much and found very rewarding. After leaving Nantucket he went to the Cape to continue his carpentry career.

Somewhere along that journey he met Rhonda Ross and together they had a beautiful daughter, Rena. Then Sam's journey continued to Florida, finally settling in Aiken, South Carolina. Here he continued to work as a carpenter in the trade that he loved doing so much and was so accomplished at. Over the last few years Sam learned how to fell trees. His favorite were the biggest ones; Sam always loved a challenge.

Growing up Sam was part of the big clan surrounding Jaycee Park. He had numerous friends and was loved and well-liked by all. Sam would give you the shirt off his back and was always there to lend a helping hand. Sam was always known as a man of his word. Sam was an avid skier -  one of the best in the neighborhood. Sam loved hunting and camping. He especially loved the deer hunting trips with his family.

Sam was preceded in death by his mother and father, Amelia L. Riche and Thomas D. Riche.

Sam is survived by his daughter Rena Dusablon and Kalvin LeBlanc; grandchildren Karena and Kaleb of Boca Raton Fl.; his sister Julie Young of Nantucket MA; brothers Micheal and Lorena of Tucson Az, Tom of Nantucket Mass. and Marty of Ogden Ut. Also surviving are several nieces and nephews and cousins who Sam loved and adored dearly. Sam will be missed dearly by all who knew and associated with him.

There will be a celebration of life scheduled at a later time.

Condolences may be sent to Martyriche123@gmail.com.

To send flowers to the family or plant a tree in memory of Sam Riche, please visit Tribute Store

Look inside to read what others have shared
Family and friends are coming together online to create a special keepsake. Every memory left on the online obituary will be automatically included in this book.
View Tribute Book
Services for Sam Riche
There are no events scheduled. You can still show your support by sending flowers directly to the family, or planting a memorial tree in memory of Sam Riche.
Visit the Tribute Store

Share Your Memory of
Sam
Upload Your Memory View All Memories
Be the first to upload a memory!
Share A Memory
Send Flowers
Plant a Tree